California State University, Dominguez Hills is among the Top 20 safest public colleges and universities in California as ranked by StateUniversity.com, an online hub for information on state institutions of higher learning nationwide. StateUniversity.com analyzed crime statistics from 450 colleges and universities throughout the country and assigned each a safety rating based on occurrences of crime on campus, weighing the probability of each incidence happening to each student. The data for the 2011 rankings comes from crime statistics reported by universities in 2010. Nationally CSU Dominguez Hills ranked 203 out of the 450. Compared against 46 other California campuses, the South ... END_OF_DOCUMENT_TOKEN_TO_BE_REPLACED

Published in the Daily Breeze Gov. Jerry Brown's May revise of the state budget confirms California's grim economic realities. Despite improved revenues and cuts already in place - including $500 million to the California State University system - the state must still reduce its budget by nearly $10 billion, which means another round of dramatic cuts will be made to state-funded institutions and programs. If temporary tax extensions are not approved by voters or the Legislature, the CSU system will face $500 million in additional cuts, for a total of $1 billion. On paper, this cut may advance the short-term mission of reducing California's budget deficit. However, such austere cuts ... END_OF_DOCUMENT_TOKEN_TO_BE_REPLACED 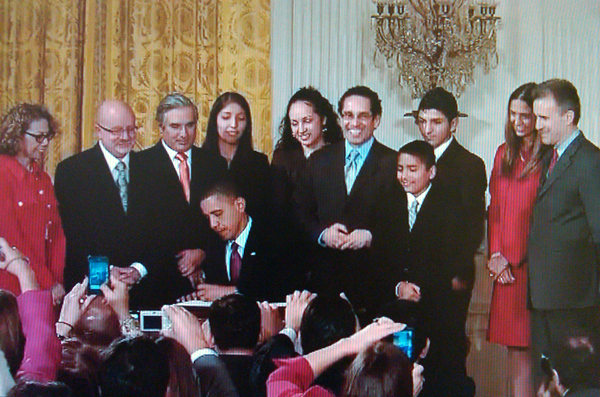 Dr. Mildred García, president of California State University, Dominguez Hills, was in Washington D.C. at the start of the week to participate in the two-day National Education Summit and Call to Action hosted by the U.S. Department of Education. On Tuesday, she was one of only 10 Hispanic education leaders and students on stage with President Barack Obama as he signed the executive order renewing and revising the 20-year-old White House Initiative on Educational Excellence for Hispanic Americans. The summit brought together administration officials with experts in education and Hispanic community leaders to discuss issues ranging from early childhood learning to higher education. The ... END_OF_DOCUMENT_TOKEN_TO_BE_REPLACED

California State University, Dominguez Hills sophomore Samantha Hernandez is featured in a United States Department of Education video intended to promote college attendance among children of Latino families. The video, “La universidad: un sueño alcanzable (College: An Attainable Dream),” is part of the Department of Education’s effort to achieve President Barack Obama’s goal of increasing college graduation rates in the United States by 20 percent by 2020. Statistics show that currently less than 40 percent of adult Americans have a two- or four-year degree, a percentage that lags behind other nations. Toward that end, the Department of Education video targets a segment of the country’s ... END_OF_DOCUMENT_TOKEN_TO_BE_REPLACED