You are here: Home / Archive / Fab Lab Teams with Toyota to Bring Dream Cars to Life

Students working in the fabrication labs in CSUDH’s Center for Innovation in STEM Education (CISE) got an accelerated course in hands-on project management and design in 2021, when they partnered with Toyota USA for the company’s annual Toyota Dream Car USA Art Contest.

Each year, children between the ages of 4 and 15 enter the contest, drawing fantastical images that illustrate the car of their dreams. In early 2021, Toyota’s Social Innovation Division approached CISE Director Kamal Hamdan with the idea of using the Science and Innovation Building’s fabrication labs to create 3D replicas of the winning entries.

“The Dream Car Art Contest encourages youth to dream of the future of mobility, and the students at CSU Dominguez Hills help bring that dream to life for the winners of last year’s contest,” said Michael R. Medalla, Toyota USA Foundation manager. “Through this activity, the students were provided with hands-on learning to further develop their skills, and we are so amazed at what they were able to achieve.”

“It was a far-fetched idea initially,” said Hamdan. “When they told us what they had in mind, we started off by asking if it could even be done. Some of these designs are pretty complex.” Hamdan agreed to give it a try, and approached his students with the winning artwork. They chose several of the pieces to begin work on, and students divided themselves into teams to tackle the projects.

“When I first saw the drawings, I thought, ‘Where do I start?’,” said Maritza Trujillo, one of the students who worked on the project. “It had so many small details! With the help of my group members, everything came together very well, though.”

The student teams chose which drawings they would work on from the entire set of winning entries. They did every aspect of the work themselves—from initial planning and project management to the final 3D printing and assembly of the models.

“The biggest challenge was in the beginning, designing our prototypes,” says Fab Lab technician Oscar Rubalcava. “It was a matter of looking closely at this 2D drawing and creating a completely three-dimensional object out of it, which sounds like a somewhat easy task. In reality, you have to consider that a 3D object is much more intricate than a 2D object. So it’s a matter of finding a way to incorporate all the little details into it, which was a real challenge.”

The students first prepared a pair of prototype models to show the Toyota representatives their skills. “When we showed the folks at Toyota our first two models, they were really blown away, to say to say the least,” says Hamdan. “The reaction was unbelievable. I think they were surprised at how well they came out. It wasn’t a surprise to me, though. It’s unbelievable how creative our students are!”

The teams spent about eight months working on the cars, and created a total of seven 3D models. Each team spent a week or so examining the drawings and planning and brainstorming their approach. Next, prototypes were created out of clay or wood, to allow team members to determine exactly how their cars would fit together.

Designs were created with CAD modeling software, then turned into physical pieces in the Fab Lab’s 3D printers. Laser cutters and vinyl cutters allowed the students to make fine adjustments to their pieces, which were then assembled into the actual vehicles. Printing and assembly of the vehicles took between four and five weeks, and then painting and putting the finishing touches on the cars took another week or two.

For Fab Lab technician Nicol Funes, the best part of the entire project was when they showed the results to the students who had drawn the original artwork. “That made me really proud, seeing the faces of the artists and their reactions to how we took their drawings and converted them to 3D models.”

“This has been an excellent educational opportunity to share ideas generated by kids across the country so that our visitors – children and adults – can experience the design process, which underlies not only automotive manufacturing but innovation in any field, as well as explore the future of the automobile,” said Terry L. Karges, executive director of the Petersen Automotive Museum.

“When people visit the museum, I hope they can see our hard work and our dedication to this project,” says Funes. “It’s a great way to show people what we can do here. Hopefully this project will help expose more kids to STEM fields, and cause them to explore STEM majors themselves.” 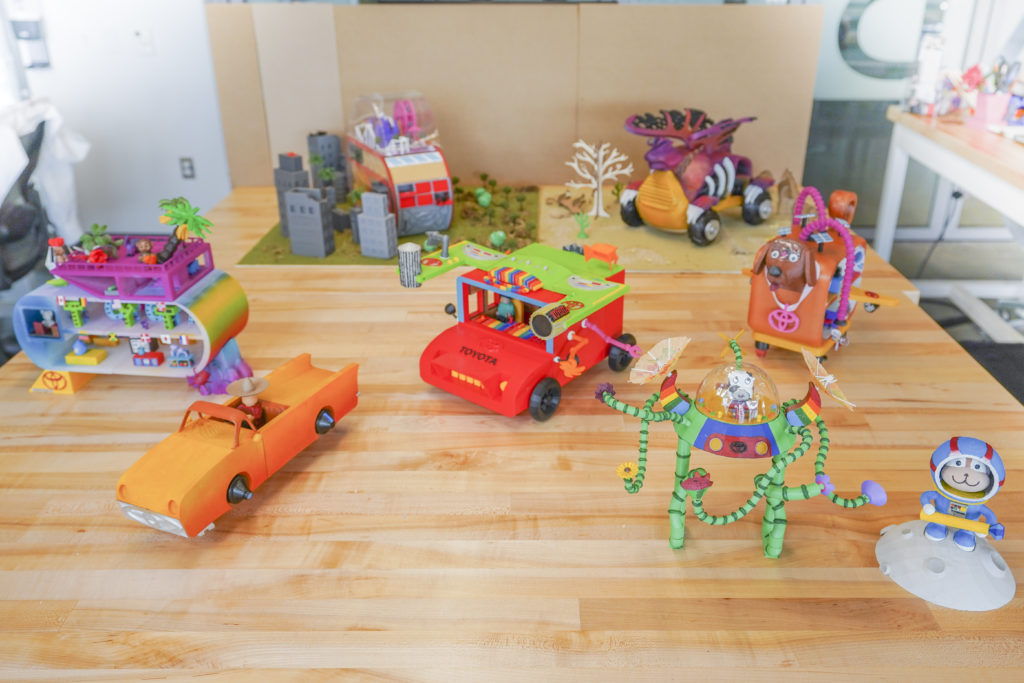